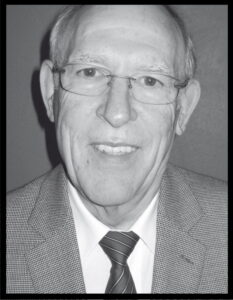 It is with great sadness that we announce the death of Prof. Bernd Stoffel, who passed away on 8th June 2021.  All those who had the pleasure of knowing him, both personally and professionally, will mourn his passing.  Europump and the wider pump sector has lost a strong, valuable, and committed supporter of many years.

As a student and then post-graduate at the Karlsruhe Institute of Technology in Germany, he was actively involved in pre-competitive research as a project worker during the founding phase of the VDMA’s Pumps Research Fund. In 1977 he switched from science to industry, joining KSB where he held several positions and management tasks in the key area of research and development. With his keen focus on research, he never lost contact with the VDMA, or indeed the wider Europump community.

In 1984, he accepted an invitation to join the Technical University of Darmstadt, where he took over the department of Hydraulic Machines and Systems. With the merging of several faculties in 1993, the department of ‘Turbomachinery and Fluid Drives’ was created, which Prof. Stoffel headed until his retirement in 2006.

Throughout this period, he was not only the scientific companion of many research projects but was also a tireless guardian and advocate for the next generation of engineers in the pump industry, with many of his graduates now holding leadership positions across the sector.

Prof. Stoffel remained an enthusiastic scientist and researcher, finding answers to essential pump design questions through his contribution to numerous research projects.  Many of the central findings of the topics he studied, such as cavitation or achievable efficiencies in centrifugal pumps, are linked directly to the performance of the European pump industry. As a central figure within of the research landscape in the field of fluid machinery, Prof. Stoffel constantly evolved his role at the TU Darmstadt, sought out new topics and gained insights that helped him to achieve the highest recognition not only in Germany, but also in Europe and across the world.

The pump industry owes Prof. Stoffel huge gratitude for some of the essential standards to which pump manufacturers worldwide follow today. ISO 9906, a standard conceived more than 20 years ago, today still provides the basis for performance testing of pumps after a revision in 2012. Even after his retirement, Prof. Stoffel remained active in the field of pumps. Between 2006 and 2020, he found a new challenge with the European Commission’s energy-saving requirements, to which his usual passion and meticulousness was dedicated.

The scientific framework for a size-neutral description of the energy consumption of a centrifugal pump, considering specific applications, is based on the methodology developed by Prof. Stoffel, which is implemented in European standards today. In the context of the increasingly ambitious climate protection requirements, this offers the pump industry the unique opportunity to achieve enormous energy saving potentials for the operation of pumps.

Prof. Stoffel’s technical and scientific achievements on behalf of the pump industry can never be over-stated, or indeed comprehensively detailed within this obituary – they are simply too numerous!  But of equal importance is to pay tribute to Bernd Stoffel as a person. He was – as all who knew him will testify – a fine and special person. He was courteous, accessible, and always a team player who strove to create a productive exchange among colleagues. He was a patient teacher, eager to impart knowledge and enthusiastic when this knowledge was gratefully received. Despite his vast intellect and professional experience, he never patronised or spoke down to people, always engaging with respect and humility. For many, he will be counted as one of those individuals, who they would have liked to have known sooner and for longer!

Immediate Past President at Europump, Dr Sönke Brodersen, knew Prof. Stoffel very well, and commented: “I had the honour of knowing Prof. Stoffel since early 1990, when I was a young engineer at KSB working directly with him on a European public funded research project. In the following years we met on many occasions, which were mostly of a business nature but never without personal exchange. Out of gratuity, he never forgot to ask about someone’s wellbeing and was always open for personal conversation.  In my role as Chairman of VDMA Pumps+Systems Association and former Europump President, I cannot thank Prof. Stoffel enough for his truly outstanding contribution to our industry.”

Frank Ennenbach, Chairman of Europump’s Standards Commission said: “As is the case for many other engineers working in the pump industry today, I learned a great deal from Prof. Stoffel, especially so whilst working closely with him on the EU’s requirement to assess and reduce the energy consumption of pumps.  His expertise and enthusiasm helped to drive through the scientific work which formed the foundations of today’s energy efficiency protocols. However, quite apart from my admiration for his intellect, my most enduring memory of him will be of when we first met.  It was during the Europump Annual Meeting in Stockholm in 1992.  We had taken a cruise tour of the Stockholm archipelago, and he was standing on the open deck, smiling and very obviously enjoying life. That will be the way I will always remember him.”

On behalf of the whole Europump community, our sincere and heartfelt sympathy goes to his wife, his children, and his grandchildren, at this most difficult of times. We will always remember him with fondness, gratitude, and deep appreciation.

Europump: Sustainability and Decarbonisation: how can the EU’s industrial policy support industry’s efforts?

Water Pumps and the Europe-wide opportunity for huge energy savings