SET has been awarded from swb Erzeugung AG & Co. KG to replace an existing hydraulic speed control coupling at the Mittelsbüren power plant in Bremen, Germany, with an energy-efficient Setcon drive system. The aim of the project is to significantly modernise and improve the efficiency of the overall system, which will increase the total plant unit efficiency by 1%. 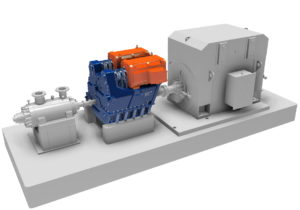 Using the variable speed Setcon system to drive a boiler feed pump with a rated power of 6 MW allows swb Erzeugung AG & Co. KG to considerably reduce its electrical energy consumption and greenhouse gas emissions. In concrete terms, the new drive system will result in a saving of

The old system is scheduled to be replaced in the third quarter of 2020 during the power plant’s periodic overhaul. As the Setcon drive system has exactly the same footprint (series concept) as the existing hydraulic speed control coupling, the power plant will only have to be shut down for a short time to enable cost-efficient installation, no structural changes to the machine bed will be required. All other units such as the main motor, boiler feed pump and booster pump can continue to operate without modification following the overhaul.

Setcon is an electro-mechanical variable speed drive system developed by SET that is perfect for replacing hydraulic couplings thanks to its high energy efficiency and outstanding retrofit capabilities. This innovative new drive concept is particularly well-suited for variable-speed operation of pumps, compressors and blowers with

and the use of standard industrial components guarantees high system reliability and availability.

The Mittelsbüren power plant in Bremen is fired with blast furnace and converter gas taken from the neighbouring steel works, which reduces the latter’s CO2 emissions. The plant unit, which has an electrical output of 238 MW, is operated by swb Erzeugung AG & Co. KG, the division of the swb group responsible for conventional electricity and heat generation.  The gas is taken from the furnaces in the steel works next door operated by ArcelorMittal Bremen, part of the world’s largest steel group ArcelorMittal, headquartered in Luxembourg.

Artificial Intelligence for the Design of Submersible Motor Pumps

Building flood defences to stand the test of time

H.E.R.O. – The rotary joint system talent of extremes up to...