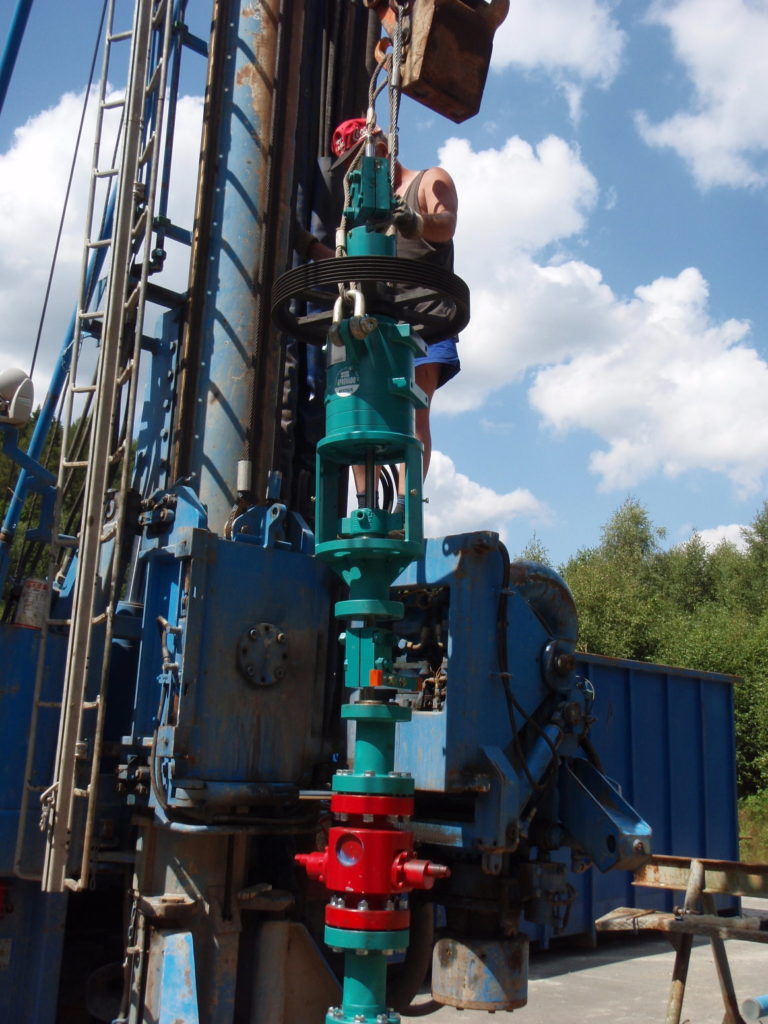 In 2015, new 4,500 m² salt water thermal baths were opened in a spa town in Saxony, Germany, that is steeped in tradition. They are fed from a highly-saturated Glauber’s salt spring which an environmental office investigated by drilling in 2009. To transport the spa water to the surface smoothly and efficiently Netzsch designed a solution with a downhole system, a system which had originally been developed for conveyance on oil fields, and needed to be tailored for this special requirements.

The state baths in Saxony originally commissioned a planning company with the investigation and development of brine exclusively for geothermal purposes. After exploration – that is a geophysical investigation of fault zones – enabled a suitable site in the Elster Valley to be found, exploratory drilling and an initial pumping trial were carried out starting in 2007. In the process, at a depth of around 1,200 m, they came across highly mineralized water with a particularly high sodium sulphate and chloride content.

For the pilot system, Netszch, in intensive collaboration with all parties involved, first of all designed a solution which was able to transport the spa water to the surface smoothly and efficiently and to cover the needs of the planned salt water thermal baths with three pools and a capacity of 450 m³ of water. The challenge was that the downhole system which was the basis for the new solution had originally been developed for conveyance on oil fields and needed tailoring to pumping the fluid, which is unique to the whole of Germany, from the well in the Elster Valley.

Reliably pumping from spa water since 2009

In the end, an NTZ 278 type progressing cavity pump was used. Its body is comparatively slim and can in principle also be operated with a submersible motor within a well bore. However, a downhole pump with surface drive system was chosen due to the small diameter of 95 mm. The advantage of this solution was also its rapid availability and maximum flexibility in terms of flow rate and the medium being conveyed. No other pumping system can cover such a wide range of flow rates. That is why this pumping technology is used more and more frequently, particularly for test phases.

In order to prevent the possibility of the salt crystallising during conveyance and grinding the elastomer, the spring water was pumped with a salt content of 22 percent – in other words diluted – and at a temperature of 42 °C during the long-term pumping trial. In addition, the speed of the NTZ 278 was set to 100 – 200 rpm, enabling the natural lubricating effect which brine exerts at higher flow velocities to be used and any elastomer abrasion to be avoided.

The NTZ 278 was installed at the well site in the Elster Valley in 2009, together with the drive head and sucker rod. It was used for more than one year in the context of the long-term pumping trial and, over this period of time, pumped spa water reliably from underground for saltwater thermal baths. As the pump only has a small number of wearing parts, it only generates low life cycle costs. Use of a pump with a heating jacket is currently planned to enable the energy efficiency of the system to be further increased: if this is placed around the pump, the brine warms up and can dissolve more salt. In this way, the lubricating effect increases, and the service life would be further extended.

Since September 2015, visitors to the 4,500 m² thermal baths environment with a variety of pools where diluted brine is used to enable weightless floating in water, have been benefiting from the data which it was possible to collect in the long-term pumping trial with Netzsch technology. Thus, there are for instance two pools with a 10 or 6 percent brine content and a salt lake with a brine concentration of 15 percent.

The Pump Video of the Month – Hopper Pump with Cutting Device

New giant pump for mining with an impeller of 2,600 mm in diameter