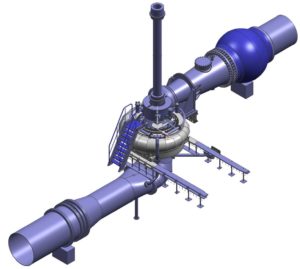 As there is a water shortage in northern China, the Shanxi Xiaolangdi Yellow River Diversion project will extend the existing water supply systems. Water from the Yellow River will be transported through a six-kilometer tunnel to an underground pumping station where it will be pumped over a distance of approximately 60 kilometers by four Andritz two-stage vertical pumps into an artificial lake in the northwestern part of Shanxi Province. Each of these pumps will achieve a flow rate of five cubic meters per second over a head of 236 meters and operate with an efficiency of over 91 percent. As the Yellow River transports large quantities of sand, the pumps have a special abrasion-resistant coating.

Andritz has already contributed towards other large-scale infrastructure projects in China in the past. At the Hui Nan Zhuang Station, for example, eight Andritz horizontal double-flow split-case pumps supply drinking water to Beijing, the Chinese capital, over a distance of 60 kilometers. Another 11 Andritz pumps of the same type operate in two stations that convey 200,000 cubic meters of water per hour from the Yellow River to the city of Hohhot, the capital of the autonomous region Inner Mongolia.

KSB commits to continuity at the top of the company

Pump technology is supporting sustainable fuel production and it is helping...